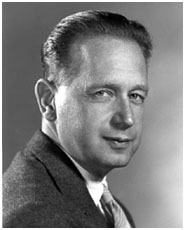 The life and death of Dag Hammarskjold:

He was the youngest United Nations Secretary-General ever but he died young in a suspicious plane crash. Dag Hammarskjold was a career diplomat and economist from Sweden and led the U.N. from April 1953 until his death in September 1961 - the only Secretary-General to die in office.

Hammarskjold was born in Sweden, growing up in Uppsala and was the fourth and youngest son of a future Swedish prime minister, Hjalmar Hammarskjold. His ancestors served the Swedish monarchy since the 17th century.

Hammarskjold had a successful career in public service in Sweden and was Secretary of the Swedish Central Bank, along with other government positions.

In 1953, the U.N.'s first Secretary General Trygve Lie resigned the post, and the U. N. Security Council suggested Hammarskjold for the job. He was seen as a competent administrator who could get things done without political views, strong assets in the Cold War era. 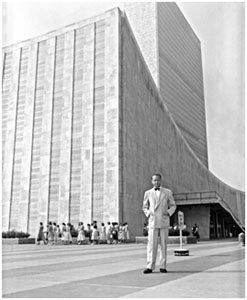 During his years as Secretary General, he worked to stabilize relations between Israel and the Arab states and visited China to negotiate the release of eleven U.S. pilots captured during the Korean War…

…and intervened in the 1956 Suez crisis and in the 1960 crisis in the Belgian Congo. 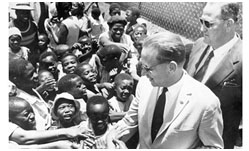 He met his critics head on, as in this 1960 speech to the General Assembly, in which he vowed to stay in his job, despite pressure from the Soviet Union to step down.

His 1961 efforts to stop fighting in another African region proved deadly, when his plane crashed in North Rhodesia (now Zambia), en route to cease-fire talks.

15 others died and Hammarskjold was only 47 years old.

The circumstances surrounding the crash were never made clear. In recent years there was some evidence that plane might've been shot down.

Hammarskjold is buried in his boyhood hometown of Uppsala, Sweden. 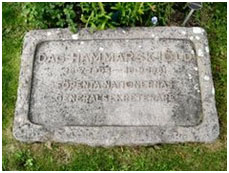 And he is honored with a park near U.N. headquarters in New York City… 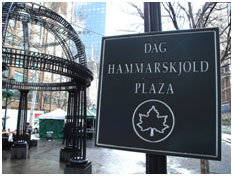 …among other memorials and libraries.

…said that "he was the greatest statesman of our century."

Dag Hammarskjold is the only person to ever win the Nobel Peace Prize after his death. (He'd been nominated before his 1961 death.)